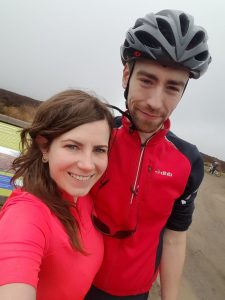 We met in 2018 – at work of all places and it wasn’t long (less than a month) before we bonded over bikes, mountains and endurance cycling.

Stew started this blog in 2017 to document his solo, 2,500 JOGLE, which you can read about here. We’ve since used it to write about our cycling adventures together – from local rides to centuries and our own JOGLE.

Now we’re taking on probably the biggest bike ride of our life, 24,000 miles around the globe. You can read about this here.

We hope this blog will inspire you to go out and ride!

It took me 4 years to really get into cycling. In 2017 I started to take it a little more seriously – taking part in local events like the Severn Hospice Big Bike Ride, Wye Valley Brewery Sportive and my favourite, the Danny Mason Highlands Challenge

I’ve got the worst sense of direction and I don’t know basic bike maintenance, so long rides that weren’t part of organised events weren’t possible for me. Before I met Stew I circled the same 30 – 50 mile routes on my own, sticking to what I know. John O’Groats to Lands End (JOGLE) felt like a distant dream! Meeting Stew was an absolute blessing! He opened up a whole new level of cycling that I didn’t know existed – bike packing. Now I have amazing adventures with my partner in crime.

Our next stop is the WORLD!

I was out on a ride, alone on a route I knew well. I’d often cycle from Ludlow to Clun/Aston-On-Clun.

One weekend I was out and the chain snapped. I didn’t have a clue what to do. I tried a bit of brute force, which was unsurprisingly unsuccessful. Just as I resigned myself to the fact that I was walking 11 miles home a VW drove past me on the quiet country road. He had the tools to fix the chain and luckily I was able to ride home.

It was my brothers birthday and he’d been to Toys ‘R’ Us – tried all the bikes and bought his favourite home. I watched in awe from the sidelines as he circled the car park. My parents felt guilty so we went back to get me a bike too! I picked a white bike with multicolour splashes.

I’ve always liked the outdoors and I’d done some travelling with my dad. Before I started cycling I’d taken a year of work and got into hiking. During this year I realised that bike packing allowed me to travel more distance, so I strapped my things onto my bike instead of my back and started cycling.

It wasn’t long before I’d heard about Mark Beaumont and his world records. His journey inspired me so I decided to cycle John O’ Groats to Lands End, taking the extended route.

My solo bike packing adventure took me across the west coast of the United Kingdom. This epic JOGLE took 35 days and I covered 2,500 miles.

This is easy. I buckled my wheel in Scotland. I was cycling around a corner on my 2,500 mile JOGLE. The front wheels dug into the mud as I was turning and this threw me off the bike and over the handlebars and I was clipped in!

The front wheel was pretty much bent in half. I was alone in the middle of Scotland with no phone signal and a broken bike. Luckily for me, a man named Bruce drove past and offered to help. He asked me if I was ok, took me to the train station and better than that he drove around the village trying to find a spare wheel for me.

With Scotland being so remote my dad was able to find Bruce online and thanked him from Shropshire via Facebook.

It was the day my dad told me if I could ride without stabilisers he’d buy me a new bike. He took them off, I rode down the road without them. I don’t think he was expecting it. True to his word, he did get me a new bike!