Part of the World Tour adventure

This task has been a challenge to say the least. Many countries have poor road markings on google earth and no street view. I’ve relied heavily on satellite maps and open street maps to construct this cycle touring route around the world. I had no choice but to manually map all 3,128 miles (5034kms) across China as the mapping provided by Google maps is horribly inaccurate, this country alone took more than 3 months to map!

It’s inevitable that our route will change many times throughout the journey, but fingers crossed, the work I’ve put in will prove useful!

You can download a copy of the full, original route below or read on to find out how we adapted the route as we cycled around the world.

This is a kml file containing the full route around the world in 1 single file. 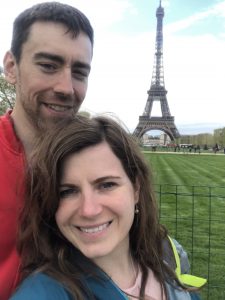 We celebrated our one year anniversary in Paris, France.

Our official start point was Paris, France, but we decided to cycle from our home in Shropshire, England. This gave us a chance to break-in our new, loaded touring bikes in our home country. It gave us an opportunity to get used to bicycle touring in a familiar setting.

As you can see from the homepage banner, in England and France we stayed on the route. It was fairly logical to do so; in England we were eager to get to Dover (maybe a little too eager) and France, being a great place to cycle, had cycle paths to follow.

We deviated from the route within the day to hit up places recommended to us, like Briare Canal, but we always came back to the route.

French roads are such a treat to cycle at times the roads were so quiet, we couldn’t believe it. We were not used to the luxury. A lot of  France is completely flat, the canals in particular, of course! 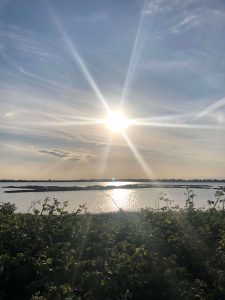 Rosalina – we cycled by just before sunset and it was gorgeous.

This is the only part of the trip that we would re-route and we would recommend you don’t follow our route through Italy if possible. This route is direct and due to the time of year it gave us the best possible chance of good weather.

We’ve spoken to other cyclists who took this same route and they reported similar feelings to us – there weren’t many friendly faces, the roads were boring and we ended up on the main roads because the cycle paths were useless or “in development”.

Basically our route through Italy was South of Milan and North of anything else. The Alps weren’t an option for us due to the time of year.

In hindsight we would consider the following options:

Highlights of Italy along our route: 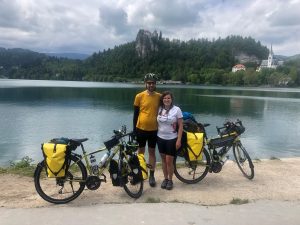 Okay, so this is where everything changed and we threw our route out of the window.

We met Marko, a great warmshowers host in Slovenia and he questioned what we were doing and why! The next day we set off on a new route, fully inspired by Marko. We reached many of the points he recommended, but not all – there would be more to see in this beautiful part of the world. The one missed opportunity that still pains us to this day was Lake Ohrid. It looked so beautiful, but we just didn’t have the time.

The map below was our rough plan. We winged it day-to-day, so it’s not exactly what we did, but it’s pretty close! You can take a look Zoe’s Strava for exact routes.

Back in Bulgaria we joined our original route and we followed it (mostly) in Turkey. There were two noticeable deviations. The first between Edirne and Istanbul – we just needed to get to Istanbul quicker so we took a more direct route and the second was the way out of Istanbul, rather than cycling the busy city we took a ferry from Istanbul to Yalova.

Cycling Turkey is fantastic – what really made it for us were the people, the hospitality and the food! I’m fairly confident that whatever you decided to do in Turkey you’ll have a great time.

Highlights along our route:

This was another country that we totally re-routed through. The route can be found on Strava (see below).

We woke up to a message on Instagram suggesting that our chosen route missed a real highlight – Goderdzi Pass. We were promised a difficult road (gravel), a huge challenge, some sizeable climbs, but beautiful views and no regrets. Our new route delivered just that.

Cycling Central Asia is fantastic! The moment we stepped off the ferry from Alat to Aktau we were blown away – quite literally, by the wind and mentally by the changing landscapes.

We were daunted by the mass of flat land and long straight roads – one of the first roads we took was 8 miles long.

Once you get to Central Asia you’ll find road options drop off, so cycling has never been easier! You cycle a flat road for miles and miles, peaceful miles all day long. You set up a camp anywhere you like, whenever you like and then do the same the next day! We loved that part of Central Asia.


Notice: Theme without comments.php is deprecated since version 3.0.0 with no alternative available. Please include a comments.php template in your theme. in /home/roadtoframe/public_html/wp-includes/functions.php on line 4805